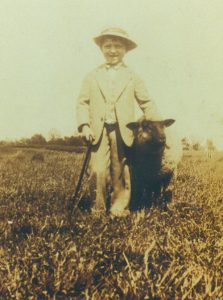 THE LITTLE SHEPHERD was a photo taken in 1925 long before Mr. Sanders had his experience, but it now seems like a sign of who he was and a symbol of what his life was to become.

On an autumn afternoon in November 1963, Stephen J. Sanders, Jr., a former Army officer, businessman and nominal church member, walked along a sidewalk in a small southern town. In one cataclysmic instant, God called and claimed His servant. Stunned, Stephen J. Sanders, Jr. made his way to his apartment only to be overwhelmingly immersed in revelations from God. He knew then his old life had abruptly ceased.

This proved to be the first of ninety days of intense instruction – what to read, where to go, what to observe… interpreting everyday life with divine understanding. This day was a day of covenant-making, the beginning of a constant communion with God and obedience to His directions.

As others were drawn to Stephen J. Sanders, Jr., they too, experienced an infilling of Wisdom, an inner transformation. God became an ever-present Guide in their lives also.

Mr. Sanders passed away on November 4, 2015 just before his 96th birthday, and while he may no longer physically be present, his message of hope and inspiration lives on through his CD’s, his DVD’s, and his many writings, and the many persons whose lives he touched.

“Blessed is the man that endures trial, for when he has stood the test he will receive the crown of life…” ~ James 1:12